Jeff Yokoyama operates a small shop called the “Yokishop” in Newport beach, California. Jeff has been designing and selling clothing made from recycled materials for a long time. He has also in the past had several successful clothing companies including Maui & Sons and Pirate Surf.

Jeff has been expanding his efforts to create a supply chain for recycled clothing. Since 2009 he has had a partnership with the athletics department of USC (University of Southern California) and UCLA (University of California, Los Angeles). Jeff initiated this in reaction to how he saw his daughter, who played volleyball in college, received new athletic clothing items every year which she would later throw out.

Americans send 10.5 million tons of clothing to landfills every year. Jeff’s experience in the apparel sector made him reflect on how he treated people and what he truly valued, he states when speaking to the Surftorialist (2014): “The moment I knew I was out of it was when I came home and I had everything. I had the right bachelor pad, the right car, the right music, everything was right. The right clothes all lined up in the closet, the right suits, everything. And I then decided that all of this didn’t mean anything. I bawled my eyes out that night. I said ‘I don’t need any of this’”.

Shirt with recycled upside down Levi pocket from Yoki’s GARDEN LEVIS clothing line. There is an abundance of Levi’s in American landfills. He uses this clothing line to show that cool things can be made from old stuff.

Jeff made a transition from the “cool/hip” look (Maui & Sons, Pirate Surf) to a more specific niche of creating clothing from recycled materials. The motto for the Yokishop is: “Design different. Make different. Sell different”.

Now Jeff buys used athletic clothing by the pound from USC and pays a 15% royalty fee for every repurposed item of theirs he sells. He only pays $2 out of pocket to make a $200 sweater. Ethically it could be challenged that the price he sets for his clothing items makes his message is anything but anti-consumerist. However it can more accurately be said that his profit margin is necessary considering that he is an independent shop owner, who hires 5 people. His clothes are not all 100% recycled, he also gets newly manufactured t-shirts from a factory in California. 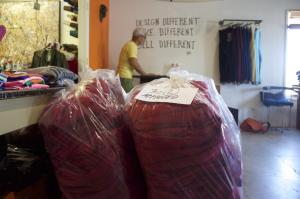 Jeff Yokoyama at work in the Yokishop. by: Michel Light

Jeff Yokoyama has a story which highlights the fundamental factors for personal change. Change in regards to turning words and deeds into concrete actions. He learned from his personal struggles, such as the bankruptcy of Maui & Sons. A more fulfilled life requires doing something that truly helps the world and others, so while he is not running an $18 million business as before, his work is more enriching. He is showing just how cool you can make old and used clothes.